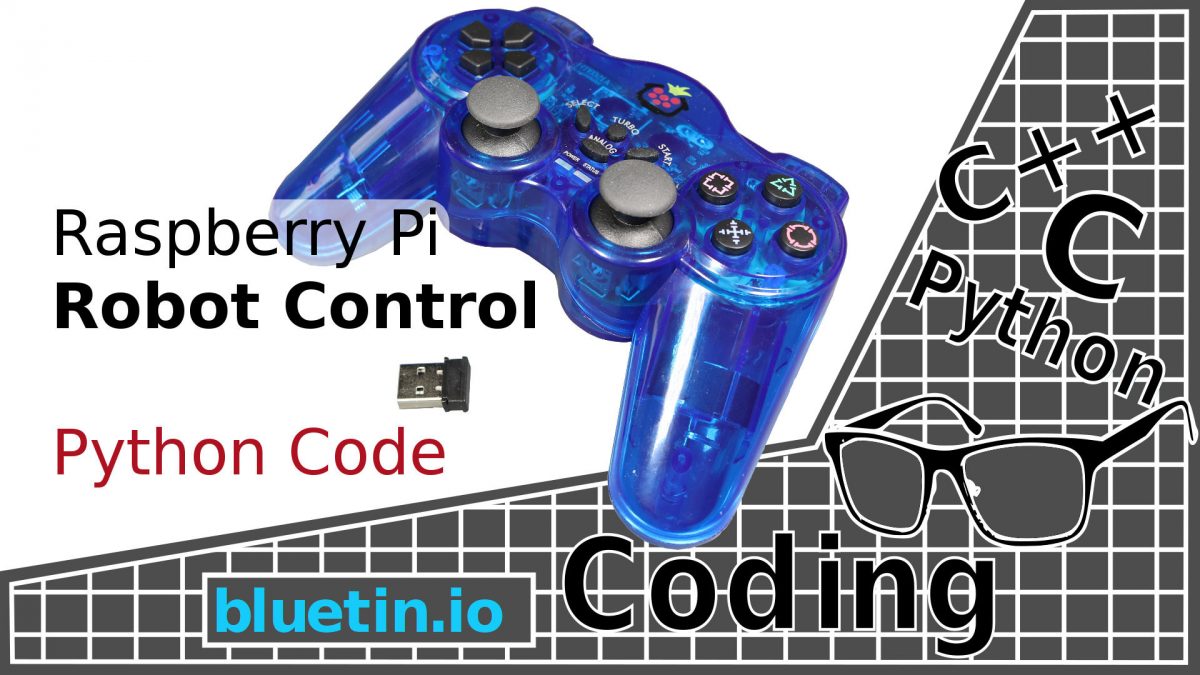 To get my Raspberry Pi robot moving, I need a wireless robot control system. So, in this article, I connect a game controller to the Raspberry Pi and use Python programming to manage the input commands. Included, is a controller button-ID map and Python base-code to translate controller inputs.

For this exercise, I will be using the Raspberry Pi controller, see the review here. However, this exercise should work with any controller that is supported by the Inputs Python module. It should be noted that game controllers are only suitable for short-range wireless robot control.

At first, it might seem a bit overkill to use a game controller for controlling a robot. This is due to the number of buttons available. However, some game controllers, like the one I use here, is plug and play. Which, will help reduce overall setup and simplify Python code. Over time, it is likely that more buttons will be used as more control features are added to the robot.

The goal is to create a parcel of code that just deals with the robot control system. So, the control system will be responsible for collecting inputs from the controller. Then format and filter those inputs to execute specific functions.

The robot control Python code below provides a good starting point in developing software to control a robot. If you are using a Raspberry Pi controller, such as the one featured in this article, you can run the code now on a Raspberry Pi. The code, in its current form, does not yet drive any Raspberry Pi GPIO pins or DC motors. However, that will change over the next few articles.

For the above Python code to run, we need to install the inputs Python module. Therefore, install inputs module, by opening a Terminal, and entering the following command:

Ideally, you want the above Python code in a suitable directory. So change to a directory to run and edit the code from. Then, either copy the above code to a new file or download the code from my Github.

Before downloading the code from Github, change directory to where the code should be put. Then run the following command at the terminal prompt:

Then to run the Python code, enter the following at the command prompt:

However, make sure the controller wireless dongle is plugged into the USB port before running the code. Moreover, the code may not show any output initially, at least until you press a controller button.

Here I break down the code to explain some parts of it. When reading the code, also note that:

However, if the event-code do not match the dictionary key, no dictionary key value update is made. Event-state values will either be:

The above functions are basically to test that the controller buttons events have filtered through the program correctly. furthermore, you can create new functions with code that interacts with the Raspberry Pi hardware. For instance, press a controller button to turn on an LED.

The print statements in the above functions are there just to provide feedback to the terminal screen. But you can remove or change these.

However, the blocking function is not a deal breaker, as there are easy enough ways to get around it. But for general switching on and off functions and PWM adjustments, the above code is fine.

The next step, to develop this code further, is to add DC motor control. So the next article we will look at functions to make a robot drive in all directions.

I hope you find this article useful – Robot Control with Raspberry Pi and Python, please like and share.

4 thoughts on “Robot Control with Raspberry Pi and Python”