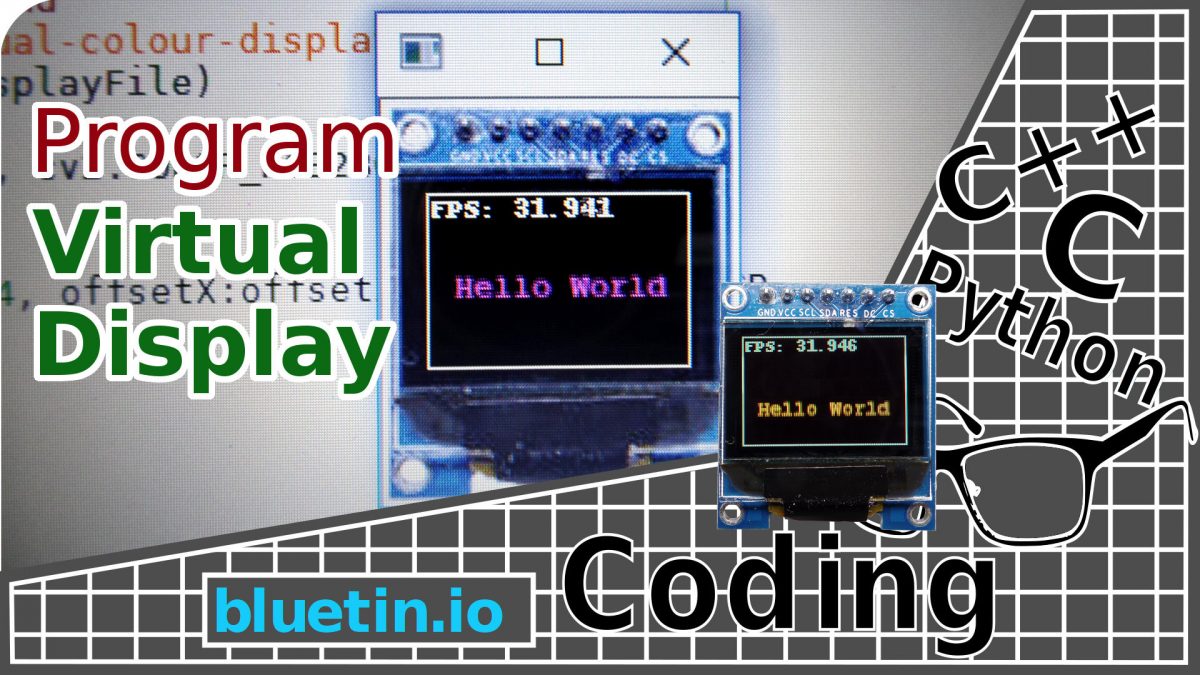 Using PIL and OpenCV, this guide will show you how to simulate a small full-colour display attached to the Raspberry Pi on a PC. The virtual display will then allow you to create animated or interactive content initially on the PC. Then, with a little code modification, port the Python code to the Raspberry Pi. I also include example test code with this guide.

Many of the small LCD or OLED displays that you can attach to the Raspberry Pi are supported with Python libraries from Adafruit and Luma-OLED. These libraries support the Python Image Library (PIL) to create content for the small displays. We can run the PIL package on various platforms including the Raspberry Pi and the PC. However, to efficiently debug the display content, we need access to a physical display.

So, this article shows you how to create a virtual display that will effectively operate like a real display attached to the Raspberry Pi. This virtual display will then allow testing of interactive or animated content on the PC before porting to the Pi. You can configure the virtual display to match different display sizes and colour depth.

Using a virtual LCD/OLED display will allow you to develop and debug display content without your PC or Laptop tethered to the Raspberry Pi. Moreover, you will have instant access to desktop-class applications to help create content within the same environment. Additionally, while using the power of the PC or Laptop, you can use your favourite text editor to debug and run Python code more efficiently to test display content. Also, using a virtual display makes the project more portable, allowing you to try new ideas more conveniently and on the move.

Things you can do on this virtual display:

Virtual Display with PIL and OpenCV

If you have followed the previous two articles in this display series, then you will only need to install OpenCV and NumPy. However, you’ll only need to install these packages on the platform where you want to create the virtual display. So, in most cases, executing the following commands will install NumPy and OpenCV on your platform:

You can find more details about this OpenCV package here:

The above guide covers setting up fonts and libraries that should be on both the Raspberry Pi and the PC. Furthermore, the guide includes example code to test both platforms. You will also find details on how to port code for display content between two different platforms.

To drive a Physical display, you might be using code similar to the following:

We first import the driver libraries and then configure the serial port:

Then, to send the PIL image to the physical display, we use the following code:

So, not much Python code at all to drive a Physical display. Therefore, you can easily comment out this code when swapping to the virtual display code.

We import two libraries for NumPy and OpenCV:

Then, we send the PIL image to the virtual display methods:

The first line we have to convert the PIL image to a NumPy array for the benefit of OpenCV. Then, we convert the image from RGB to BGR colour model. And finally, we show the resulting image on the computer desktop.

However, additional lines of code are added to provide a method to close the image window by a keypress. But this code can be extended to catch further keypresses for creating interactive components of the display. In this case, the code allows the ESC key to close the program.

Before the program closes, we add a final line of code to close the OpenCV window:

The following example code will run on the Raspberry Pi and has the virtual display lines of code commented out.

This code runs on the PC that has been configured to run the virtual display. It includes the code for the Physical display but has been commented out.

And If You Want To Get Fancy

The above image is about the right size to overlay the virtual screen on top. However, you can do this with any display module you want to simulate. Use a graphics program like Gimp to scale the image to size to fit the virtual display screen.

The Python code snippet below shows how you can overlay an image on top of another:

The above code modifies the small section code used in the virtual display example code seen earlier. The output will be something like the image below with the new screen overlay on top:

Next Article Using the PIL Package

In the following article in this series, I will be looking at using PIL to render a menu system to output onto a display. This menu system will use a new menu library I’ll be publishing shortly on PyPi. I’ll be looking at how to implement interactive functions that I can use between the PC and the Raspberry Pi using the virtual display.

DISCLAIMER: This feature may contain affiliate links, which means that if you click on one of the product links, I’ll receive a small commission. This commission helps support the website and allows me to continue to make features like this. Thank you for the support!

I hope you find this article useful – Simulate Animated OLED/LCD Display On PC With PIL and OpenCV – Graphics and Fonts, please like and share.