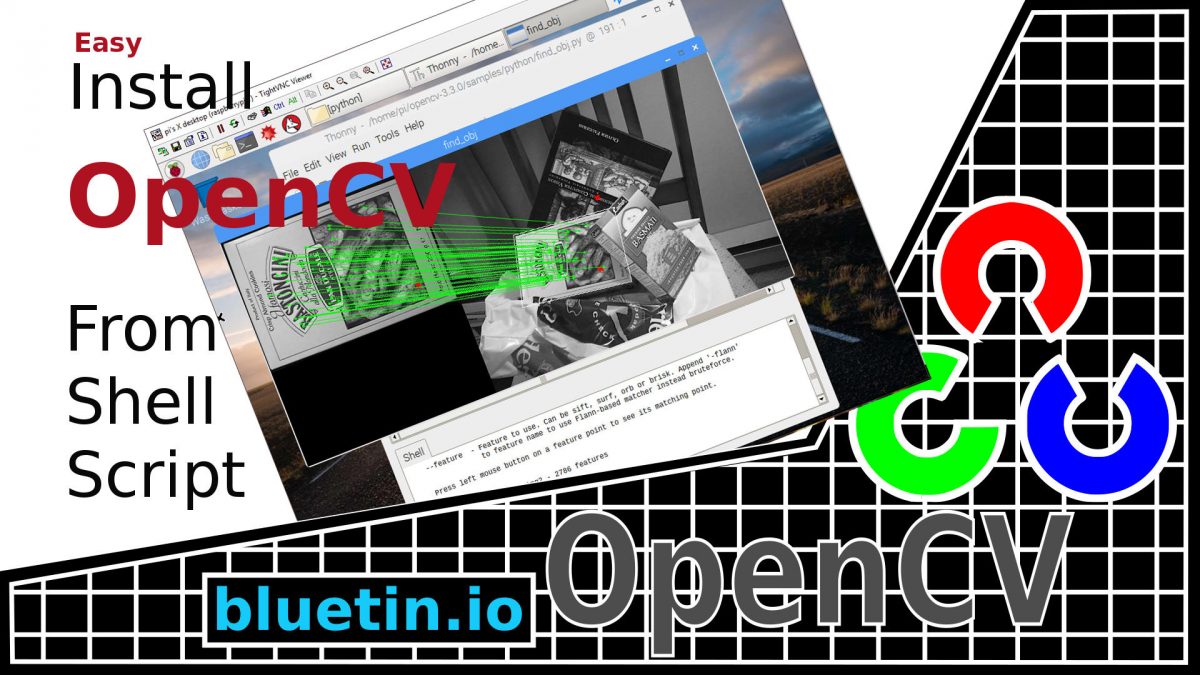 This article is a quick guide on how to install OpenCV onto the Raspberry Pi – the easy way. I will introduce a shell script that will install OpenCV and dependencies without user intervention. Furthermore, I will also introduce GNU Screen so that the OpenCV installation can be done remotely in a Virtual Terminal Session.

Once you start using OpenCV, especially on a Raspberry Pi, you can be installing the camera vision software many times over. For example, worn out SD cards, OS upgrades and OpenCV version upgrades are some of the reasons to cause a new OpenCV installation.

It requires a lot of steps to install OpenCV. First, the package lists are updated. Second, many dependencies and libraries need installation. Then, there are downloading and extracting file operations to complete. And finally, configure, build and install OpenCV.

To keep this guide short I’ll publish the Details and functionality of the OpenCV installation shell script in a separate article. Because otherwise, the guide will become too long. Here, I just want to focus on using the shell script to install OpenCV on to the Raspberry Pi. However, people with experience can read and alter the shell script to fit personal requirements.

Before continuing to install OpenCV, check the list below to see the requirements.

Use the following guides to setup and configure the Raspberry Pi if necessary:

If OpenCV is going to be installed remotely, via SSH login from another computer, I will recommend installing GNU Screen onto the Raspberry Pi. Because, while using a GNU Screen virtual session, the install process will be protected from client PC unplanned disconnects. However, if attaching keyboard, mouse and monitor, GNU Screen can be ignored when using the Raspberry Pi directly.

The install process will be done from the Terminal, so open a Terminal session from the Raspberry Pi to install OpenCV. Run the following commands at the command prompt:

Next, download the shell script from my GitHub account. Use copy and paste if possible to avoid typing the full web address. Also, the address might wrap to the next line due to length.

Start a GNU Screen session, if installed earlier, at the command prompt:

Start the OpenCV installation process by executing the following command:

The installation will now start, and the process will take about 3 hours 45 minutes on a Raspberry Pi 3. Hence this instal process runs on one CPU core if on default settings in the shell script.

If the shell script was started in a Screen virtual session, then you can execute the following command to detach from the session. The installation will keep going in the virtual session, but you are now able to exit the Terminal safely. Thus, you can now switch off the client computer to save power. But, leave the Raspberry Pi running to finish the OpenCV installation.

After the key presses above, you will return to the original Terminal login. However, if this is not the case, you may have pressed the [d] key too slowly after pressing [control-a] on the keyboard.

When you think the OpenCV installation has done, return to the Terminal login as before and enter the following command. This command will reattach you to the Screen virtual session:

Now that the OpenCV libraries are installed, you might like to try some OpenCV color detection or even object detection:

Anyway, there are plenty of Python OpenCV samples to try out. Therefore, access the Raspberry Pi Desktop, either directly or through VNC. Then, open the file browser. The path to the samples will be something like the following:

Then mouse-right-click on any of the files you see such as edge.py. Then select Thonny Python IDE from the pop-up menu. When the code window opens, select Run the current script from the Run menu. And there you have it, Python sample running.

I hope you find this article useful – Install OpenCV onto Raspberry Pi from Shell Script, please like and share.

3 thoughts on “Install OpenCV onto Raspberry Pi from Shell Script”