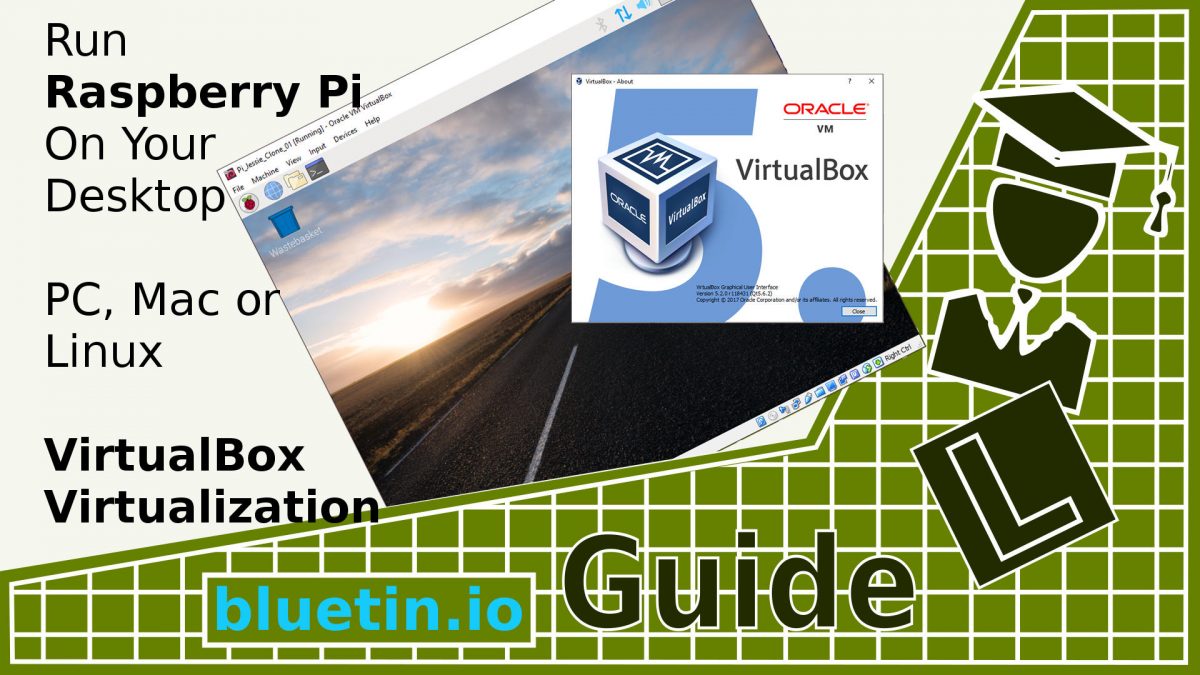 In this guide, I’m going to set-up a Raspberry Pi Raspbian Virtual Machine. I’m going to install VirtualBox, a cross-platform virtualization application that will allow me to run Raspberry Pi Desktop on a PC or Mac. During the set-up, I will also enable support for copy and paste and file sharing between host and virtual machine.

Ideas below will show how I might use a Raspian virtual machine.

To get started you first need to download VirtualBox, which is a powerful x86 and AMD64/Intel64 virtualization application from Oracle. VirtualBox currently runs on Windows, Linux, Macintosh and Solaris, which are referred to as hosts. You may also like to download VirtualBox Extension Pack. This extension pack will give you USB2 and USB3 so that you can access some devices that require them.

Install VirtualBox followed by VirtualBox Extension Pack. However, installing the extension pack is optional at this point. When you run the VirtualBox application you will be presented with the VirtualBox Manager start screen as below.

We are going to configure a new Raspian Virtual Machine by assigning a name and setting various parameters. The virtual machine is basically a computer that will run the Raspberry Pi Desktop OS.

To create a new virtual machine you select New on the top left of the VirtualBox Manager application window. Here you will have the opportunity to name your Raspian Virtual Machine. Since this will be my first Raspbian OS set-up, I want to add the Master keyword. So the name I use, for example, is Pi_Jessie_MASTER. Also, in the other fields, select Linux as type and Debian(64-bit) as the version.

Using the keyword Master will remind me that I want to keep this image as a clean install. Hence, apart from routine package updates, no extra software will be installed. However, if I want to work with a Raspbian virtual machine, I use a clone of the master. consequently, you will always have a fresh Raspain installation available to clone. Select next to move on.

You can set the memory size to match the Raspberry Pi hardware. However, I think the default 1024 MB looks good and chose that. Select next to move on.

If you are new to this application there is only one option to choose. Select the option to create a virtual hard disk and click create for the next settings.

Here you select the hard disk file type. Unless you want compatibility with other virtualization clients then the default is good. choose VDI (VirtualBox Disk Image) and click next.

We can dynamically allocate the hard disk size so that we can save host disk space. Which means if we select 16GB for our initial disk size, we might only use 10GB, and as a result, a smaller disk file size. Thus the clones we create will also be the smaller disk file size. Setting a fixed disk size will likely result in redundant hard drive space that can not be used. Select dynamically allocated or fixed size hard drive then click next.

By default, the virtual machine files will save to the user folder on the main hard drive. If you have extra drives on the computer you can choose one of those if there is enough space. I’m choosing to use 16GB for the hard drive space. But since I opted to use dynamically allocated space, the initial file size will be much smaller. Finally, click create, to create a new virtual hard drive.

The virtual hard disk is now created and ready to have the Raspbian image installed. All the virtual disks you create will appear in the list on the left. By selecting a virtual disk you will see settings that are currently set in the right pane. Clicking on the title for any of the settings group will open the settings editor window.

You can assign extra CPUs to the Raspbian virtual environment from the settings dialogue. After selecting the virtual disk you just created, click on settings on the above menu. Then select System from the list on the left, followed by clicking the Processor tab. Here you will see a slider to select the number of CPUs you want to assign.

While in settings, select Storage to view Storage Devices and Attributes. Under Storage Devices heading you select CD/DVD drive that branches from the Controller: IDE. Then select the small CD icon next to the Optical Drive drop-down list box under the heading Attributes. After clicking the small CD icon, a drop-down list will appear. From the list select Choose Optical Disk File… Find the Raspberry Pi Desktop OS file that you download from Raspberry Pi foundation site. Once you load the file, you are ready to start the Raspbian Virtual Machine. Click OK to return to the VirtualBox Manager.

Click Start from the above menu after selecting the virtual disk from the list. Another window will open and you will eventually be presented with the installer boot menu.

I want to install the Raspberry Pi desktop OS so that the OS will boot from the virtual hard disk when I start it. So I select install from the boot menu. Use the arrow keys on the keyboard to move up and down the menu. Then press enter when selection is made.

During the Raspbian virtual machine installation, there will be some configuration options to choose. When you come to configure disk partitions, note that the configuration is only being made to the virtual hard disk.

When the installation is complete, the virtual system will reboot and the Raspian OS will load. Thus this will be a good opportunity to update the package lists and make upgrades. So start the terminal program an enter the following commands:

These utilities run inside the Raspbian Virtual Machine to provide closer integration and improve interactive performance. So there are three important features we can get which are listed below.

Execute the following commands in the terminal window to enable the above features:

After a reboot of the Raspberry Pi desktop, open the terminal window again and enter the following commands:

The Raspberry Pi desktop will shut down and close the virtual machine window. We now can add a folder to share through the VirtualBox Manager Settings.

Instead of spoiling the new Raspberry Pi set-up, the new set-up can be cloned to make working copies.

Depending on the speed of the host computer, you can create a clone in just a few minutes. This is many times faster than reinstalling the Raspberry Pi Desktop. You can create and delete as many clones as you want as long as you have enough disk space on the host PC.

You can create a clone by right-clicking, with the mouse, on a virtual machine you want to copy. Then, from the drop-down list, select Clone. Type a unique name for the clone and tick to reinitialize the MAC address of all network cards. Choose full clone after clicking to the next window.

It is important to properly shutdown the virtual machine as you would with real Raspberry Pi hardware. This will help to avoid file corruption that may prevent the OS from starting.

I hope you find this article useful – Raspberry Pi Raspbian Virtual Machine on your Desktop. Please like and share.