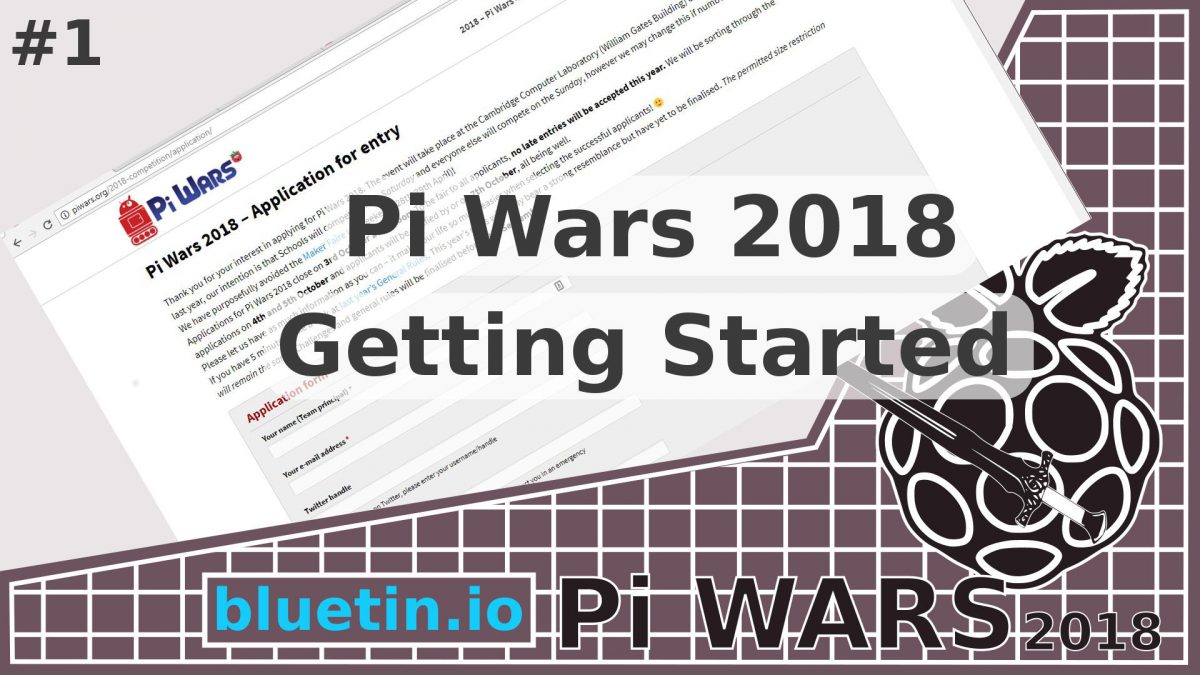 This series goes into detail on building and programming a robot. A robot that is good enough to compete in the Pi Wars 2018 Competition. In this article I look at the things I need and strategy to get a start right away.

During the course of this series I will attempt to develop a good foundation to build on when designing a robot for competitions like Pi Wars. Keeping it simple is going to be key and I’ll be looking high and low to find the best method to implement special features.

As of today there is seven months to go for Pi Wars 2018 weekend. So ideally, to compete to a level where I could win a robot challenge, I will need to start building and programming the robot right away. I don’t want to start debugging and tuning in the final week or so before competition.

I wish everyone luck in getting in to the Pi Wars 2018 competition – I’ve still got to send my form yet. However if you don’t get in, I hope you’ll follow this series and build your robot anyway. Thus there is always the next competition to aim for.

For years I’ve been tinkering with electronics, PICs, Arduinos, programming and Raspberry Pi just to see what I can do with them. I also got a few years of 3D printing under my belt. With many project write ups I publish on my other website – airtripper.com.

So now I move in to building robots and will be publishing many topics and videos about my efforts similar to my experience in 3D printing. Pi Wars fits the niche of topics I’ll be covering on this blog and my YouTube channel.

Pi Wars 2018 Competition will give me an opportunity to build a competition ready robot while sharing build details and videos that are relevant to other robot builders. The individual challenges in the competition will have interesting problems that will be fun to solve.

I already have an Arduino type remote control robot. The robot is a skid steer four wheel drive type robot with NRF24L01 radio control. So I have a robot platform that can be ported to the Raspberry Pi Robot Platform. The skid steer software code routines on the Arduino Platform can be ported to Python. The skid steer code is designed to provide smooth variable motion in all travel directions.

I’ve also tested I2C Serial routines in Python with an Arduino compatible connected. The I2C Serial can provide a bridge to hardware PWM provided by another micro-controller. Access to PWM will allow me to have variable speed control on the robot.

So from the above I reckon I’m off to a good start. I’ve just got a few bits of hardware to put together, some code to port, a bit more code to write and I’ll have a remote control Raspberry Pi robot. From here I can start designing and coding for each Pi Wars 2018 Competition Challenge.

To get a good start quickly any robot chassis with wheels will do at this point. This will give me more time to research, find ,design and build a better robot chassis to fit the Pi Wars 2018 Competition. In fact having a temporary robot chassis now will allow me to get on with setting up the electronics and start coding right away.

However, the Raspberry Pi itself will take a big chunk of time to set-up initially. Thus there will be Python libraries to install to support various connected hardware such as joysticks, other electronic modules and displays. Additionally, I will need to implement a backup and restore strategy with a successful test to safeguard development efforts.

With so much work going in to setting up and coding the Raspberry Pi, it would be good practice to keep set-up notes and to backup files regularly. The notes will come in handy especially because at some point I might want to change to a different Raspberry Pi board.

I will not be thinking about the PI Wars 2018 challenges at this stage. I’ll be working towards getting a remote control robot up and running Initially. Then the remote control feature will be useful to test new motors and chassis designs.

The list below is a good place to start especially if budget is on the low side.

I go through the set-up process of the Raspberry Pi Zero W as described similar to the above. In this set-up I’ll be using the Raspbian Stretch Lite. Compared to the desktop version of Raspbian, the set-up process and installed modules is going to be slightly different so beware of that.

The purchase price is going to vary greatly depending on how quickly you want the items. Therefore shop around checking out Amazon, Ebay and local electronic stores.